Why concrete washout is harmful to the environment

.
Most contractors know that concrete slurry or washout can cause a fish kill, if it reaches a lake or stream.  That's because the fluids are highly alkaline--as corrosive as draino.  And aquatic organisms are extremely sensitive to changes in Ph (alkalilnity).

For that reason, it's illegal in Madison to discharge washout to the gutter.  Violations are enforced by Public Health and referred routinely for prosecution.  Contractor Report documents washout spills with photos and reports them immediately to Public Health.

However, dumping concrete waste or slurry to the soil is legal.  But that doesn't make it a good practice or good public relations.  There's increasing evidence, reported below, that concrete waste in the soil has the potential to harm the environment and degrade our drinking water.

In the last 20 years, our knowledge of bacteria has undergone a revolution.  We now know that bacteria can live inside solid rock.  Bacteria live and reproduce high in the clouds--where they help form rain as water condenses upon their bodies.

The first hints came in the 1960s, when scientists in the Antarctic found algae living and growing inside the pores of rocks.  The climate near the south pole was harsh--but the microscopic plants found conditions INSIDE rocks to be warmer and wetter than outside.Since then, bacteria have been found growing in the pores of solid rock several kilometers below the surface.  How they got there is a mystery.  Perhaps these are the descendants of bacteria present in the sediments from which the rocks formed millions of years ago. 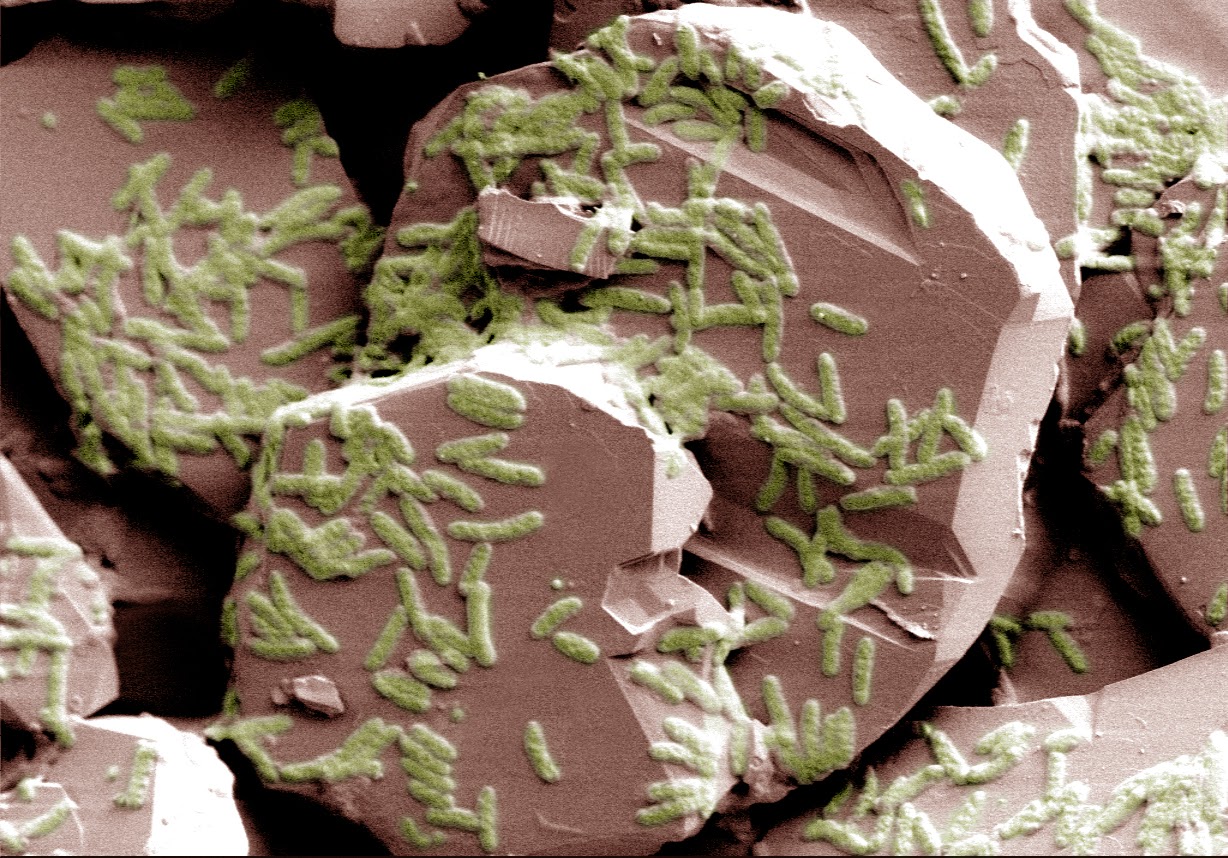 Detoxifying bacteria Shewanella oneidensis (green). Source: EMSL
These buried bacteria are able to grow without sunlight by harvesting the energy found in chemical compounds, such as rust or sulfur.  Some even live off the natural radioactivity in rocks.  They persist like Rip Van Winkle in a state of suspended animation--metabolizing just enough to repair damage to their DNA--individual cells perhaps living for eons.There's a vast, living world beneath our feet, of which we have but a glimmer of understanding.Bacteria found in fracking wells
It used to be that you could study bacteria only by growing them in a Petri dish.  If they wouldn't grow, you couldn't study them or even identify them.  And most bacteria can't be cultured. But with DNA analysis, you can identify bacterial genes in almost any sample drawn from nature.  Now scientists are finding bacterial genesin samples from fracking wells.  It turns out there's life down there!Drillers are taking note--the bacteria could corrode their equipment, or create slimy films that would cut down on the well's flow.  If the bacteria start to flourish, they might produce waste gases which would contaminate the natural gas produced by the well.
Free services from life underground
Bacteria, fungi, and larger organisms like earthworms form soil from weathering rock.  Without soil, we'd have a barren planet with little to eat.  That's a story for another day--here I'm talking about life belowthe soil.One of the miracles of this planet are the pure aquifers you can find in most places.  Simply sink a shallow well, and you have all the pure drinking water you need, even if surface waters arecontaminated.How does the filthy water from an urban flood become clean as it sinks into the ground? It's easy to understand how a coffee filter works.  It's like a screen on the window to keep out mosquitoes.  The pores in the filter are too small for the grounds--so the hot water passes through, but the coffee grounds stay behind.The pores in the ground do act like a filter--a filter many miles thick.  But there's a lot more to the cleansing action of the ground.  Many forms of pollution actually stick to the particles in the ground.  It's a process called adsorption.  Phosphorus, a well-known pollutant in our lakes, binds to or adsorbs to tiny soil particles.The bacteria also purify groundwater by using pollutants as food.  They take complex organic compounds like pesticides, and break them down to simple, harmless substances.This bug eats heavy metal pollution
Some undergound bacteria have flexible metabolic machinery.  If one chemical they use for energy isn't available, they switch to using another chemical for food.One helpful bacterium named Shewanella (photo above) detoxifies heavy metal pollution.  It normally gets its energy from rust-like minerals.  But if the conditions turn alkaline, bug shifts to using sulfur compounds for its energy source, producing foul-smelling hydrogen sulfide as a by-product.  SourceProtecting underground life
Given an emerging awareness of life miles below our feet, and how little we know about it--how should we respond?Throughout Madison, concrete wasted is dumped into the ground--legally.  The waste is either leftover concrete, or the "washout" from cleansing equipment after pouring.  It happens at every construction job, from buildings to street resurfacing, to sidewalk reconstruction. 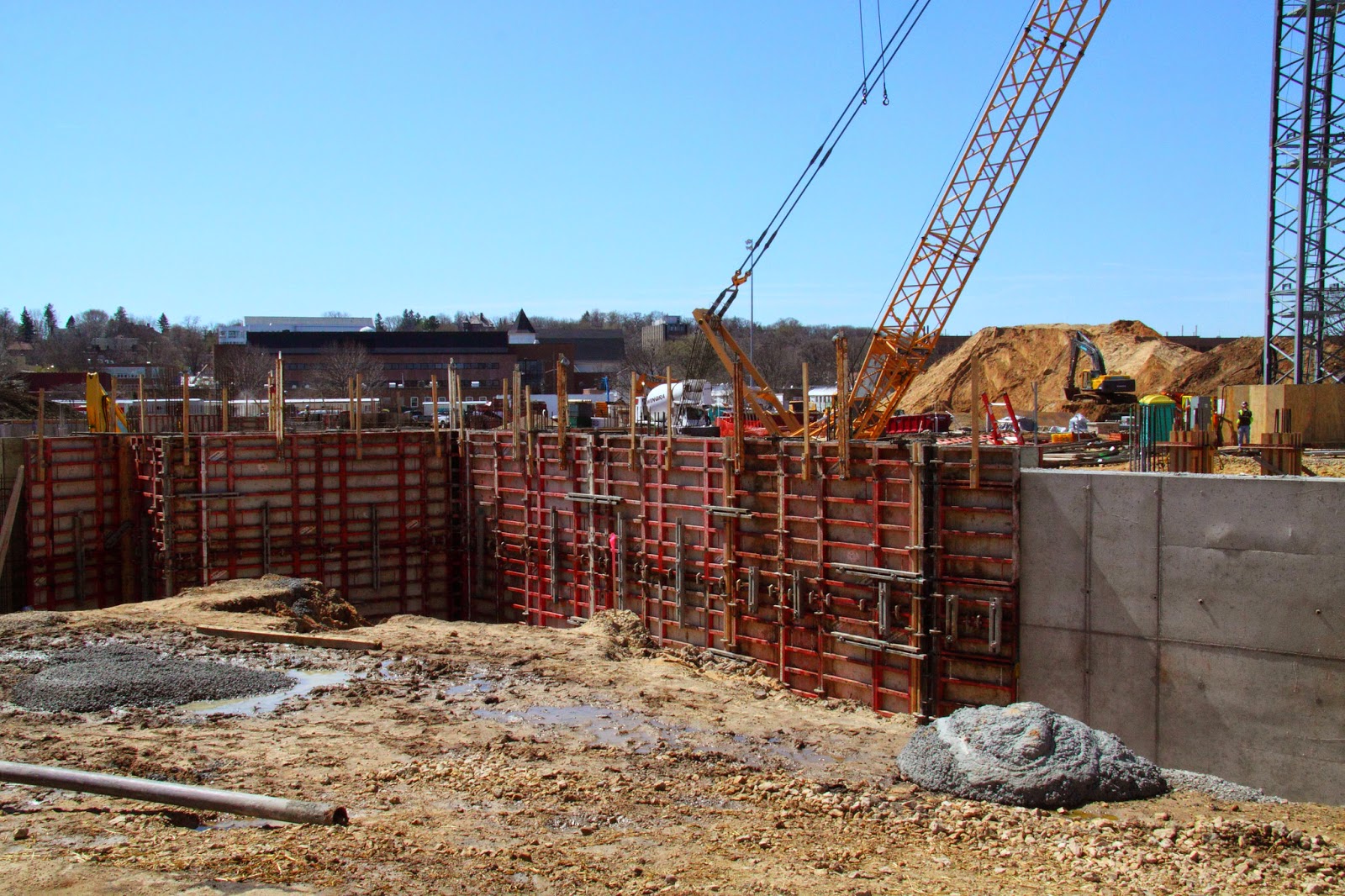 Construction of Lakeshore Residence on the UW Campus in 2011, showing concrete waste dumped on sandy soil.

This waste is highly alkaline, and contains traces of a potent carcinogen--chromium VI.  The alkalinity must kill tree roots and other organisms for an unknown distance downward. 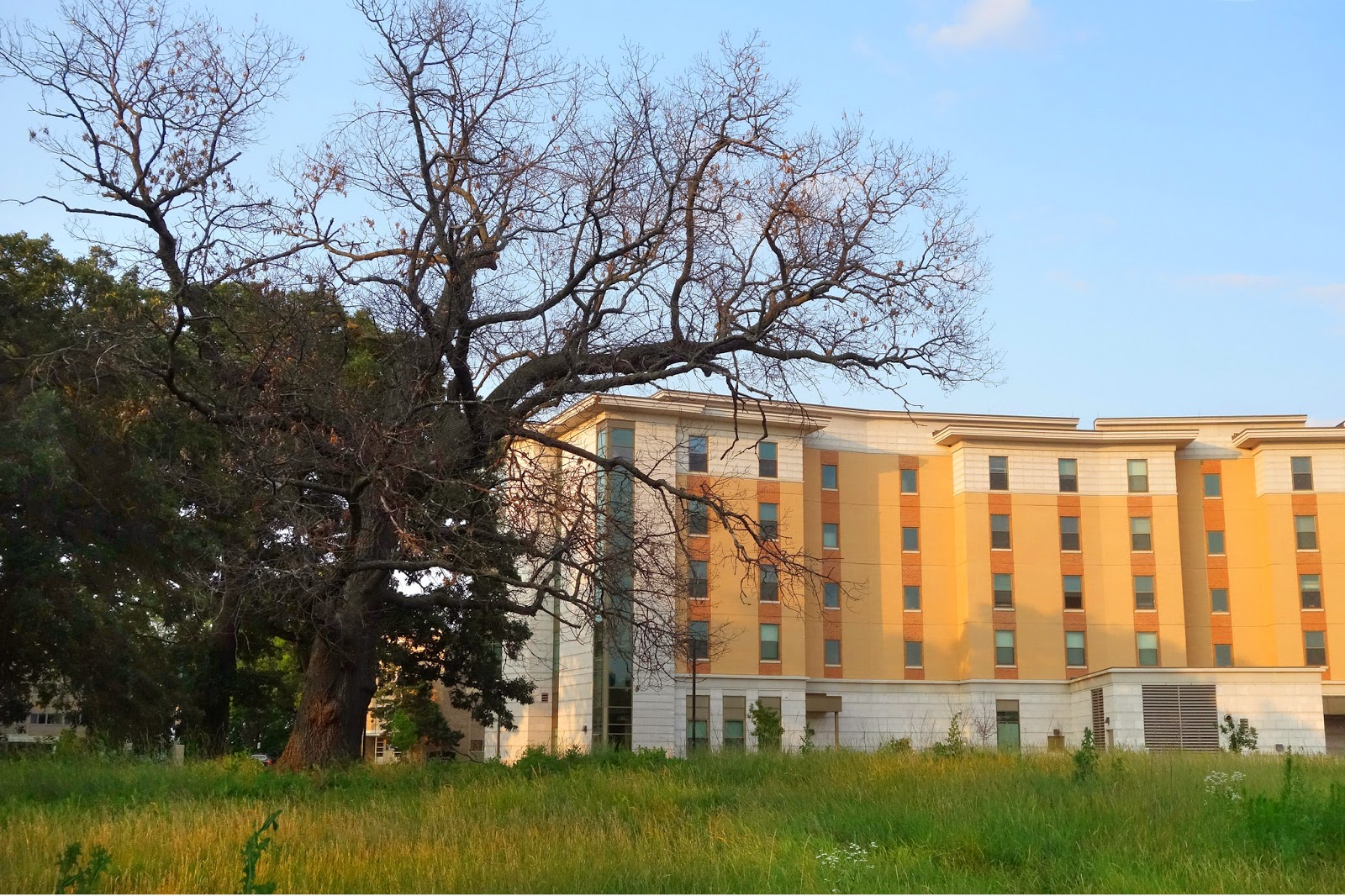 The same residence hall, after completion, with dying oak.
Even at sub-lethal levels, the alkalinity has an effect.  For example, with the beneficial Shewanella bug, we know alkalinity forces it to shift from metabolizing rust to using sulfur compounds.It's time to consider a ban on dumping toxic concrete waste into the soil.  At the very least, it must be stressing our urban forest.  It's killing or altering the beneficial organisms in the soil, and the ones deeper down that clean our drinking water.A more ominous possibility is that the concrete waste is the source of the chromium VI that has turned up at trace levels in three of Madison's wells.

Dumping washout is bad for business.  Here's a comment posted on one of my other blogs: "Great post. Because of some of your earlier posts, when I recently hired a mason to replace our chimney cap, I specifically asked him how he handled concrete waste water. He said he mixes in buckets and takes them home, lets them dry and knocks the chunks out. So that sold me on him.  Leslie."
Posted by Webmaster at 1:24 AM