How phosphorus escapes from construction sites 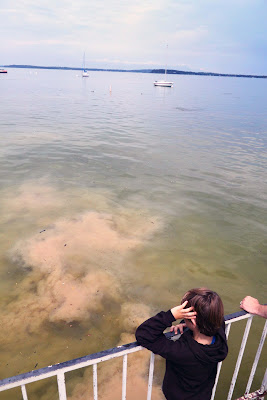 When you see mud in the lakes, you know phosphorus is escaping.
Lake Mendota 7/7/10.
﻿
Studies show that 19% of the phosphorus in our lakes--an important nutrient that causes the growth of toxic algae--comes from construction site erosion.

In Wisconsin waters, phosphorus acts like a fertilizer.* A small amount goes a long way towards stimulating growth of weeds. An ounce of phosphorus results in many pounds of noxious weeds. More than that, it upsets the natural balance of waterways, leading to fish kills, undesirable aquatic plants, and more.


Since the Clean Water Acts of the 1970s, people have been trying to control phosphorus from construction sites--but progress remains elusive. Why is this nutrient so hard to control?
Phosphorus is found in rocks and soil--and especially in decaying organic matter like leaves. So when soil is disturbed by construction, the phosphorus is free to move when it rains.
It’s curious, but phosphorus is nearly insoluble. So how can it move with the stormwater? The answer is called “adsorption.” This is a weak bond the phosphorus makes with the surface of a particle of soil. So when sediment--muddy water--flows off-site, the phosphorus goes along as a hitchhiker.
No problem--we just filter the water, and the phosphorus stops… right?
No--it’s more complicated. A number of BMPs** are used to filter runoff. They all tend to trap the coarsest particles, Some are better than others, but they all fail to trap the finest particles of sediment.
Why most BMPs fail to stop phosphorus

The smallest particles are a big problem, because--all together--they have a huge surface area. If you take one pound of coarse particles that can be trapped, and compare the adsorbed phosphorus to a handful of dry mud of the same weight--mud that passed through the filter--the pound of mud has far more phosphorus attached. That’s because the fine particles of mud have a huge surface area, compared to the coarse particles.
This means that most of the phosphorus is not stopped by the various filters commonly used at construction sites. And the most commonly used BMPs--storm water inlet filters--are the least effective at stopping the small particles.
Even if they filtered all the water going past them, they wouldn’t stop the fine particles. But as anyone know who has looked at inlet filters in the field, they are poorly maintained, installed on too few inlets, and most water flows around them to the next unfiltered inlet.
So if you depend on inlet filters, you are just kidding yourself.
A good filter is a slow filter

Here’s the reason most filters can’t work. If you made the pores of the filter cloth small enough, the water passes through very slowly. The pores in the cloth get clogged. Too much water would back up.
There is only one kind of filter that really works--that really catches all the fine particles and the attached phosphorus. That’s a natural filter with vegetation. We’re talking about a grassy swale (a shallow channel), or a settling pond.
These two BMPs have numerous advantages over the BMPs above:
There are a few BMPs that mimic swales and ponds, but they aren’t as good 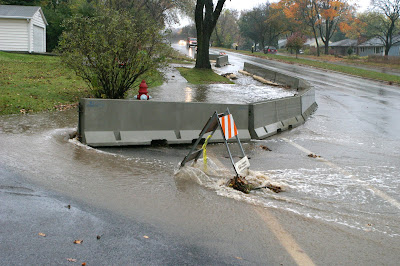 ﻿Sediment trap on Midvale during heavy rain, ﻿10/24.
A sediment trap is like a miniature pond. It works pretty well for a low flow. But if there’s a lot of flow into it, it overflows, and most of the mud is just passed through. The mud that it does collect probably settles only when the flow slows at the end of the storm.
If the trap is not carefully cleaned after each storm, then the next big flow will wash all the remaining dirt downstream.
Sediment traps could be somewhat more effective, if arranged in chains. Likewise, rain gardens with a small capacity can be arranged in chains, so they can handle larger storms.
A bladder of filter cloth can work fairly well. These are often used to filter muddy water pumped from a trench. But they have a limited capacity, and they have to be cleaned. And, under some conditions, I have seen them pass muddy water.
Disadvantages of swales and ponds
However, with creative design and planning, these can be overcome. Streets can be used to export muddy water during a storm to a basin or swale that has been planned nearby. For example, at the Hillcrest-Upland Greenway project, the ravine being worked on drained a basin half a mile long. The ravine was capable of producing very large flows in a storm.


But only a block downstream from the lower end of the ravine, a long, grassy swale was located in the median of Midvale Blvd. The swale had in fact been designed to handle heavy flows, and had storm water inlets along its length.  Swale: upper L of photo below. 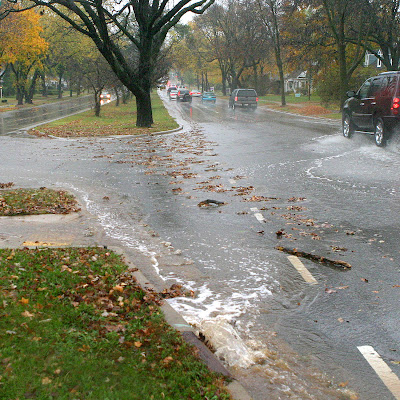 Directing heavy runoff from the ravine to this swale seemed to be an ideal solution--except that City officials were reluctant to create traffic problems or deal with issues beyond the site. But problems for traffic existed anyway, because when it rained hard, the ravine water overflowed into Midvale, and went right past the swale.

The lesson from Midvale is, that if procedures can be developed to deal with any adverse public reaction from runoff leaving the site, and if Engineers are willing to expand their bag of tricks to offsite locations, then possibilities for stopping phosphorus increase.
No free lunch (except for the algae)

Where swales like the Midvale median don’t exist, large rain gardens could be built in advance. After the project is finished, these gardens would remain to beautify the neighborhood and improve recharge of groundwater. They would remain as green infrastructure for future construction projects.
In many cases, terraces downstream from the construction could be used as settling basins, or turned into a chain of medium-sized rain gardens.
Or, gutters dammed at intervals by a series of silt socks, could become a series of settling basins. After a storm, the socks are moved to the terrace--then a street cleaner removes the trapped sediment from the street. Next, the socks are moved back to the gutter.
The area needed for swales and basins can be reduced through smart planning. On many street construction projects, clean water flowing into the construction area can be routed around the project. That way, less DIRTY runoff leaves the construction area, so a smaller swale or basin can do the job.


If you see muddy water leaving a construction site, running down the gutter, and into a storm water inlet (even if it has a filter), you are not stopping the phosphorus.
The problem will never be solved… until the muddy tracks and trickles stay where they belong.
Routing runoff down a street, or building a large rain garden, aren’t as convenient as plopping down a few hay bales or inlet filters. But those current solutions simply aren’t effective.
When we decide we care enough about clean lakes and streams--then swales, settling basins, and rain gardens are the only serious solution.
#     #     #
*  A more colorful analogy is that phosphorus in waterways acts like a dose of heroin for an addict.  The dose sends the lake into a frenzy of ecstatic growth, leading to unbalanced, destructive behavior.  The algae suffer such extreme withdrawal pangs that they have a huge die-off, leading to rotting masses of vegetation.  Next, the fish run out of oxygen and die also.  All this rotting biomass releases the phosphorus, which then sends the ecosystem another high, kick of growth, and dieoff.  The lake is hooked!  Meanwhile, the dealers (Chemlawn and other merchants of fertilizer) go about the neighborhood, pushing their harmful products.
**  Best Management Practices have been repalced by what are called "Terchnical Standards," basically the same thing.  Each one is a recipe for a certain way of controlling erosion, backed by research.  They are considered the best current practices.


Update on smallest particles:
In Lake Tahoe, CA, "the improvements [in water clarity] were in part due to the realization that fine particles are so important. “For the last eight or nine years, the science has shown that fine particles are the major cause of clarity decline. Today we have many projects in the basin that are being designed to better retain these fine particles and keep them out of the lake.” Source
Posted by Webmaster at 3:07 PM