Construction dust is a proven health hazard for Madison

.
"Long term exposure to air pollution is linked to heart attacks and strokes because it speeds up hardening of the arteries, known as atherosclerosis," according to new research by University of Michigan scientists. source"The vessels of people exposed to higher levels... of fine particulate air pollution thickened faster than others living in the same metropolitan area."
“Linking these findings with other results from the same population suggests that persons living in a more polluted part of town may have a two percent higher risk of stroke as compared to people in a less polluted part of the same metropolitan area." 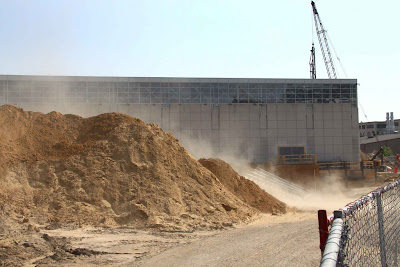 Findorff Construction next to Kohl Center

Madison--24th most pollutedAnd Madison has been ranked by the American Lung Association as the 24th most polluted city, for short-term particulate pollution--essentially dust and smoke.  This is the same kind of pollution--known as PM 2.5--that was studied by the Michigan doctors.The many construction sites around town are major contributors to dust in our air.  The particles are blown directly off construction sites on windy days.  High winds during spring shouldn't surprise construction managers. 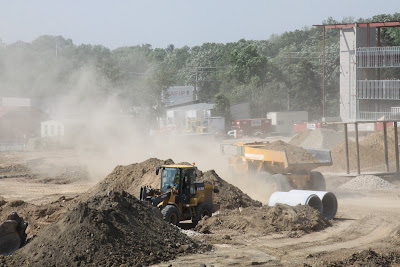 Much of the dust also comes from mud tracked onto streets by tires of trucks. The mud is spread for miles over the streets--then it's lofted into the air by passing vehicles. 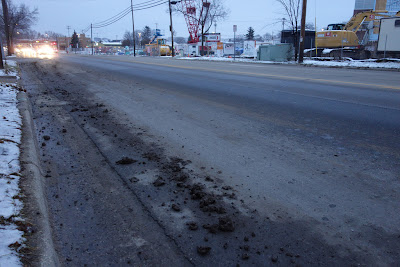 Mud tracked out of Ghidorzi site, Dec. 19, 2012.
The mud also washes to the lakes when it rains, causing algae blooms.  Studies show construction sites contribute 19% of the phosphorus to Madison's lakes. 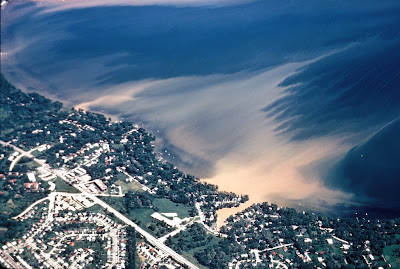 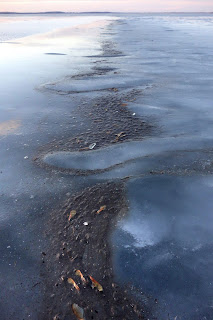 In winter, you can see the fallout of dust onto the ice of Lake Mendota.


This layer of dust accumulated within a few weeks, soon after the ice formed.
A case study
One recent example is the construction site at the corner of South Park Street and Fish Hatchery Rd, managed by Ghidorzi Companies.  On April 26, dust from Ghidorzi was so thick that it obscured traffic at the busy intersection, according to resident Steve Vanko. 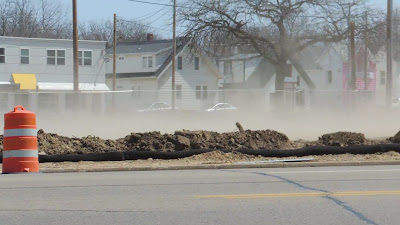 Throughout the demolition and construction which began last fall, the site has contained large piles of soil and debris, some piles as tall as two stories.  Last summer, Styrofoam insulation blew all over the neighborhood and into Monona Bay, where it can still be found.
The piles have not been protected by tarps, and were screened by only one short fence, often tattered.  Dust suppression with water may have occurred briefly, but was not continued.   Re-vegetation of the large bare area has been repeatedly postponed.
A hazard for nearby hospitals
On April 26, the dust was blowing towards St. Mary's and Meriter hospitals, located nearby.  Weather records show strong winds often blow from the site towards the two hospitals.  Video of dust blowing towards hospitals.
Patients weakened by illness are more susceptible to harmful effects of air pollution   The American Lung Association estimates that tens of thousands of people in Madison are especially sensitive to air pollution.
It's ironic that the building under construction will house...
Meningitis outbreak kills 23
A national outbreak of this brain infection was traced to contaminated injections, manufactured by a pharmacy in Framingham, Massachusetts.  The infection was caused by a fungus... but how did the fungus get into the injections?
"At least one of the vials confiscated by inspectors from the Food and Drug Administration had so much 'foreign matter' floating in it that it could be seen with the naked eye."  Source
The filters outside the clean rooms at the pharmacy were clogged with dirt.  And located on the same property as the pharmacy was a recycling facility, where what looks like furniture and construction materials were broken up with heavy equipment.  Source
Investigators were looking into the contributing role played by environmental conditions, caused by the recycling operation.  But it was clear that sloppy procedures at the pharmacy were the chief cause.
That recycling operation was similar to what happened when Ghidorzi demolished and recycled the Bancroft Dairy (below), leaving the piles of debris to blow about, close to two hospitals and many homes.

One resident near Ghidorzi complained that their air conditioner had burned out, due to dust from construction.  Let's hope the hospitals have inspected their air conditioning filters, to make sure they aren't clogged with dirt from the Ghidorzi site.
Lessons from the meningitis outbreak...
Development in Madison builds our city.  Construction provides jobs.  But with proper management and inspection, construction doesn't have to be dirty, or harm our health.Inspection procedures for erosion control need to be improved.  Madison relies on self-inspection by contractors.  When they inspect themselves,  they always get A+.

Related photos and stories about Madison... 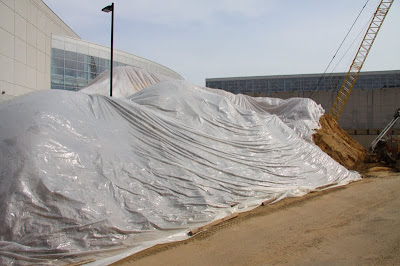 How Ghidorzi could have covered soil piles.
Construction can be clean, if properly regulated. 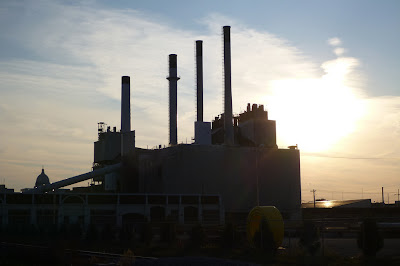 Brown air over Madison--ranks 24th most polluted city for dust 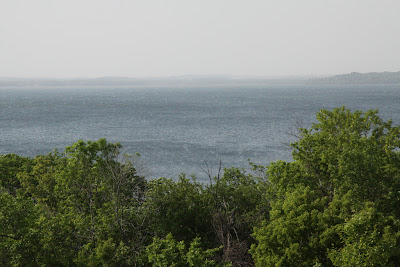 Windblown dust over L. Mendota obscures the horizon.
Posted by Webmaster at 2:03 PM No comments: