When I started this project, I naively believed that construction erosion was the fault of contractors.  Since then, I've learned the problem is a lot more complex.  There are many causes--but if I had to assign the biggest responsibility for failure, I'd pin it on the City of Madison.*

The City is under a mandate from DNR to reduce suspended solids entering our waterways by 40%, by 2013.  This is an overall target, with compliance based on computer modeling of the watershed--not on the success or failure of erosion control at any one site.

While the City is working with one hand to improve water quality, the other hand has no incentive to reduce construction site erosion.  This puts the City in the strange role of building a detention basin to meet the 40% mandate, yet neglecting erosion control during the construction of that basin.

For City projects, Engineering is also acting as the "developer."  The City wears two hats...
This dual role creates a conflict of interest.  There's great political pressure to reduce spending--to get the most construction with the minimum expenditure.  The better the erosion control plan, the more it's going to cost the City.

Hence, erosion control plans are usually inadequate, and haphazardly enforced.   If they were strictly enforced, the contractor would say: "We didn't expect to spend this much on erosion control.  It's not in the contract.  You misled us!  Next time, we're going to bid a lot more for a job like this."

If you speak frankly to contractors, they say: "This is a very competitive business.  We can't afford to put in a high bid for the erosion control portion of a job."  And if they bid low**, you can bet they are going to do the minimum they can get away with.

So the City virtually never hands out fines for erosion control violations.  It would be like fining themselves. 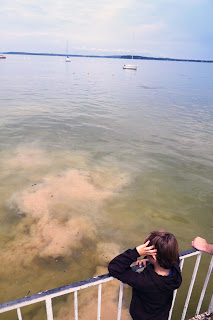 This same conflict of interest exists for State projects.  The State's Dept. of Administration plans major construction on the UW Campus, while another arm of the State--the DNR--is responsible for enforcing erosion control.  Partly for this reason, erosion control for projects on the UW campus is poor, with mud going straight to the lake.

Runoff from UW construction enters L Mendota at Lake St.
Erosion control is based on rules, not outcomes

The way the law is written, if the City follows certain procedures for erosion control plans and inspections, then they are "in compliance."  It doesn't matter whether the erosion control is successful or not.  I've heard City engineers assert this point in committees.  City engineers sum up by saying: "More effective erosion control simply isn't economical or feasible.  There's always that big storm that will overwhelm your measures."  End of story.

Contractor Report can prove that erosion control measures routinely allows much mud to escape to our waterways.  The sad state of our lakes is testament to our failure to control construction site erosion--and we know that 19% of the phosphorus in the lakes comes from construction sites.

In surveys, citizens of Madison say they are dissatisfied with and concerned about the state of the lakes.

If a bridge collapsed, engineers wouldn't be able to say: "That's OK.  We followed procedures.  It's not economical or feasible to build safe bridges."  People would find a way to cut through the red tape and figure out how to build good bridges.  We hope, someday, that will happen with erosion control.  Outcomes do matter.

** S&L Underground and Trucking was the low bidder for the Hillcrest--Upland Greenway project of 2010.  Line item bids for "Stormwater Control" during the project ranged from $500 (S&L) to $4,121.  The $500 was clearly inadequate for this project in an eroded ravine, as subsequent storms proved (below). 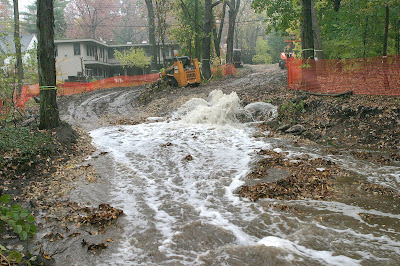