.
Over the years, a number of springs on the shores of Lake Wingra have gone dry. Vigorous springflow is important, because it helps to keep Lake Wingra clean. Improved spring flow is part of the restoration plan for the lake.

The Odana Infiltration Project, costing over $2 million, was supposed to restore groundwater in the area by pumping stormwater into the ground. But now that project is in limbo, since it was found that the groundwater was being contaminated--over legal limits--from the salty runoff they were pumping.

Still, a number of springs in the area continue to flow--to the delight of residents in the area. 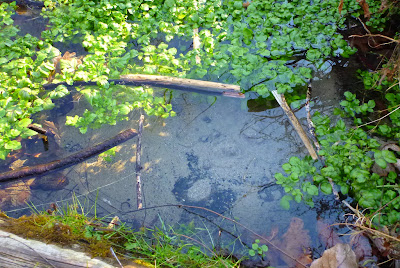 Now, heavy pumping of groundwater is occurring at two construction sites in the area: 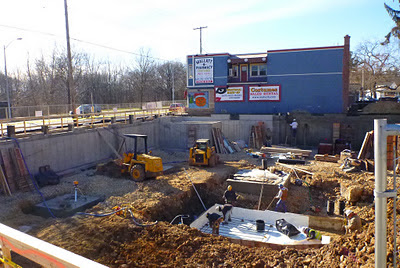 The contractor is Landgraf Construction.
The blue hose to the left is carrying the pumped groundwater.
Steve Glass sent me the following report:

You may have heard the recent report that excavation at the Parman's Place project has opened up a large underground water vein or spring (estimated flow rate of >50 gallons per minute, but no one will really know until it is measured with a pygmy flow meter).

According to reports, "the contractor is de-watering the site (under their de-watering permit related to petroleum contamination of the site) and diverting the flow into the sanitary storm sewer."

Also, according to reports, "the contractor expects that continuous pumping will be required to keep the sub-grade de-watered."
These reports and the possibility of continuous pumping raise numerous ecological and hydrological issues for the watershed, the lake itself, and the wetlands bordering it.


There are many unknowns. For example, scientists don't know with certainty the groundwater flow path, so the major question is how will this new spring opening impact existing ground water discharge rates and flow patterns? Increase them? Decrease them? No impact?
Ken Bradbury of the Geological and Natural History Survey has suggested (according to one source) that Parman's construction might disrupt flow to existing springs and pointed to the nearby Council Spring complex just off Arbor Drive in the Arboretum as a possible candidate for disrupted flow.

We have a record of recent flow rates (gallons per minute) for the past few years for the Council Springs complex and will be able to make some comparison of before and after flow rates.


"Continuous pumping" over many years--sounds like a big waste of energy. Could the groundwater be used for heating and cooling.... or for a beautiful fountain?
Next to Wingra Park behind Jac's restaurant 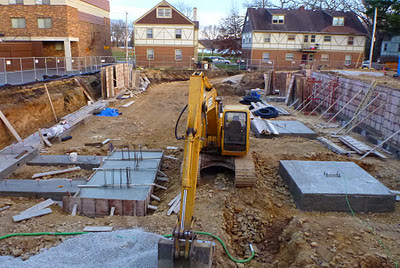 The contractor is Fisher Construction
At this second construction site, there is a lot of groundwater flowing into this excavation, requiring a lot of pumping. As required by law, the flow is being filtered through a large bladder resting next to Arbor Dr.
Water from the bladder is seeping into the storm sewer--hence it's lost from the ground and from the springs.
Another problem is that a lot of sediment is escaping from the bladder, and getting into the gutter. It's only a short distance to the lake. Sediment is the main way that phosphorus gets into lakes, to stimulate noxious weed growth.

Both problems--loss of groundwater and sediment--could be solved if the bladder can be moved to a depression in Wingra Park just across Arbor Dr. In that location (right), the water would return to the water table, and the sediment would be harmless.
This construction site is violating regulations by leaving the streets very dusty and unswept after each working day.
The pumping at both sites is within a 1200 foot distance from the spring--and may therefore be subject to regulation.
Teach-in at the springs
David Liebl led a group to the Council Ring Springs to talk about the issues, according to a post on alder Sue Ellingson's facebook site.
Below: East and west branches of the Council Ring Spring. 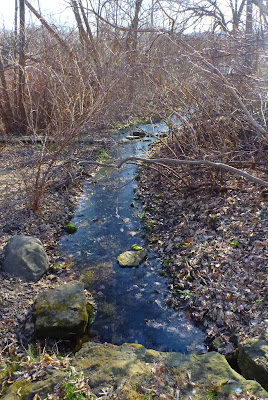 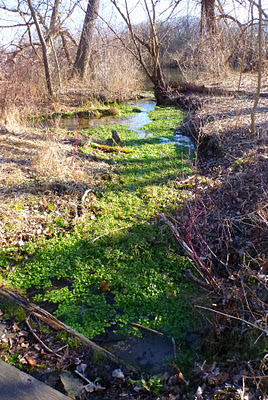