Concrete wastewater, and the slurry from cutting concrete with a saw, are very toxic to aquatic life. In addition, the waste contains chromium, a known carcinogen that can contaminate groundwater.  Chromium is has been found at moderately high levels in three wells on Madison's west side.

Madison has not recognized the dangers to the environment from concrete waste.  Dumping of concrete waste into the soil occurs all over Madison. 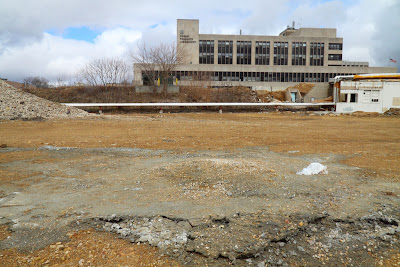 Concrete waste at the Forest Products Lab. More photos
Dumping wastewater into the gutter or stormsewer is illegal
In Madison
"For both City and private projects, the Health Department considers the discharge of concrete wash water to the curb to be an illicit discharge--and they regulate it under Madison General Ordinances 7.46." These ordinances don't specifically mention concrete wastewater, but obviously it would be included among the pollutants regulated.
Provisions call for notification via 911, fines between $50 and $2,000 a day, and financial liability for cleanup.
"For general city projects discharge of concrete to the stormwater system is prohibited by the Standard Specifications section 104.10," p. 18:
Concrete trucks or any other equipment shall not be flushed out onto public streets, walks, or gutters. This does not include streets being worked on within the project, unless they are completed pavements.
For City projects with lots of concrete, the City puts highly detailed, specific language about handling concrete waste into the contract. For an example, see Bid Item 90039.
However, there are many projects with only a little concrete involved, and these do not have the specific language. So these projects would be covered under the Standard Specs above. These projects with "just a little concrete" still produce a lot of waste.
At constructon sites, City Engineer Greg Fries says: "Generally washing of chutes to a pit on site is acceptable - if no pit is available generally the practice is to wash in to an artificial pit (normally stacked concrete forms lined with a geotextile membrane).
In Wisconsin (The DNR)
Ready mix plants are tightly regulated. See the permit webpage here and the information sheet here.
Greg Fries says: "There are no WDNR regs (that I am aware of) for washing of concrete chutes at construction sites. Although work with Jim Bertolacini on this issue in previous years allows me to say that Jim Bertolacini considered discharge of wash water to the curb to be an illicit discharge."
The EPA
...considers concrete wastewater important enough to issue a BMP fact sheet on how to handle it.
Get more information
A good manual for contractors
A more detailed manual for contractors, from Aukland, NZ
Concrete washout BMP from EPA
#      #      #
Acknowledgements: Thanks to David Liebl, Greg Fries, and Roger Bannerman for quickly responding with much helpful information. The info in quotes about Madison and DNR is from an email from Fries.