.
Barriques is known for their distinctive cafes that also serve wine--at five locations in the Madison area.  A new store is being planned for 961 South Park St., where remodeling is underway.  It's at the corner of S. Park and Parr streets, less than a block from Monona Bay.  Environmentally, it's a sensitive location--Monona Bay is popular with fishermen.


On Wednesday morning a local resident noticed a crew pumping a large volume of cloudy water from inside the site being remodeled.  The water was flushed onto Parr St., where it flowed down the gutter and into a storm sewer, bound for Monona Bay.  The resident said he recognized the man supervising the pumping as one of the owners of Barriques. 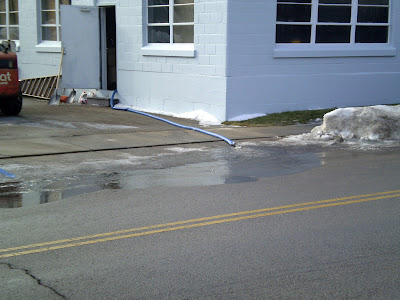 
The resident notified DNR personnel, who then contacted Rick Wenta, Public Health and Environmental Protection, under the City's Health Department.

Update 2/21, based on email from R. Wenta:
"Generally, water from inside a structure is considered waste water, which has to be discharged to the sanitary sewer. (There are some exceptions; foundation water is one example.)

There are no provisions for filtering, then pumping the waste to the storm sewer. Under the state plumbing code, a floor drain collects domestic wastewater which must be directed to the sanitary sewer.

Public Health Madison and Dane County is responsible for enforcing Madison General Ordinance 7.46 which states: it is illegal to discharge potentially polluting substances to the storm sewer."

Next, a truck for pumping septic systems drove onto the site and began work.  It wasn't clear weather their services had been previously planned by Barriques, or whether it was a response to the complaint.

That afternoon, Mr. Wenta inspected the scene of the illegal discharge.  When notified that the resident had photos of the illegal pumping, Wenta said he would forward the information to the City Attorney, and that the Health Department would press for a fine.
Toxic possibilities

What was in the water being pumped towards Monona Bay?

When I inspected the photos in photoshop, the water appeared cloudy and grey. This is consistent with concrete slurry--which results from cutting concrete with a saw, or cleaning up where concrete is being removed. Concrete rubble was being carried out of the Barriques location by a Bobcat, and loaded onto a truck labeled "Ken Wagner, the Concrete Remover, Waunakee, WI, 831-6355." 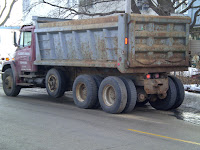 
Concrete washwater and slurry is extremely alkaline--enough to burn the skin.  Upon reaching Monona Bay less than a block away, it could cause a fish kill.  In New Zealand, such dumping is more closely regulated than in Madison, where mishandling of concrete waste is commonplace.  More on concrete waste.
Update 2/21: Mr. Wenta, who inspected the property after pumping ended, said he did not believe the cloudy water in the photo represented concrete slurry.

Neighbors are concerned about other toxic chemicals.  At least three shops were formerly located at the site...
The resident who blew the whistle was worried about another possibility--that Barriques was pumping the sludge from the bottom of a drain trap--a concrete pit usually found in the floor of a building of this type.  If so, that sludge could be contaminated with any of the toxins listed above.
Recently, Madison had a scare when toxic Chromium 6 (at very low levels) was found in the City's tapwater.   Several years ago, a well on the near East Side had to be permanently shut down, because of industrial contamination.  Concrete waste and wastewater contains significant amounts of Chromium 6.
Lessons from the incident at Barriques 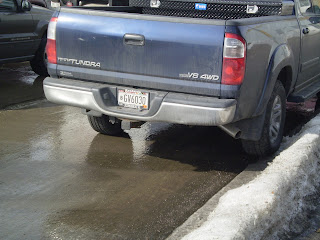 The illegal hose was returned to this truck.  Click photo to read plate.
Posted by Webmaster at 12:03 AM No comments: