As of August 1, the gravel pad at on West Gillman had been moved to the center of the street (outside the Tri-North site) and was now sufficiently long. However, before trucks can get to the pad, they have to traverse a long stretch of dirty street from Henry St, where there are piles of disturbed soil. So the pad still does not seem to be fully functional. 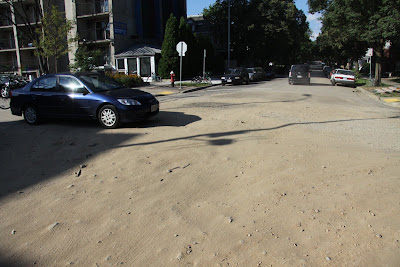 Intersection of Henry & Gillman is still very dirty, and there is no inlet filter at Henry & Gormam preventing this dirt from washing to the lake.
While the Gillman-State St intersection seemed to be cleaner than before, the Gillman-Henry St intersection remained very dirty. An added problem was that, even though Gillman St was marked "closed," public vehicle traffic was moving through it, tracking dirt out.

A clear violation was the new stormwater inlet at the intersection of Gillman and Henry: The inlet was filled with sediment from recent storms, but had no filter.
Towards the upper end of the Gillman St construction area, there was much disturbed soil, and several piles of soil, with no silt socks or other containment measures.
The only measures preventing a major sediment spill from this site
While Contractor Report notes that these measures are probably sufficient for the current standard (a two-year storm), we believe these would be easily overwhelmed with a larger storm, such as the 6" storm that recently occurred in Milwaukee. We believe erosion control measures in Madison should prepare for larger storms.