The dangers of bidding low on erosion control

On the Hillcrest-Upland Greenway project, S&L Underground and Trucking bid only $500 on "stormwater control."

Either they were completely ignorant that this was a ravine draining half a mile of basin... or they thought: "We'll get the contract, then worry about the details later." 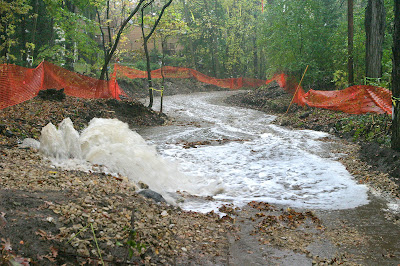 Oops!
Now the time to "worry about the details" has arrived.
City Engineering is also responsible, because they provided almost no guidance in the specifications about what "Stormwater Control" might entail.  They left the details up to the "creative neglect" of whoever won the contract--"Let the bidder beware."  Writing specifications this way is like selling a house with a leaky basement, and not telling the buyer.*

Now Contractor Report aims to see that "Stormwater Control" is done properly, no matter what the expense.  S&L Underground and Trucking accepted that responsibility, when they signed the contract.

There is a pending lawsuit against the City and Speedway Sand and Gravel, over erosion control problems at Edgewood Av.  At present, this lawsuit cannot go forward, since that project was finished before the 60 day "grace period" expired.  But it seems logical that the lawsuit could still succeed if the plaintiffs can prove that the City shows ongoing negligence in erosion control.

Even if that lawsuit is dropped, the Greenway seems like an ideal place for another lawsuit.  There are plenty of upset neighbors, and the project is going to last longer than 60 days.  Fines of $37,500 per violation per day are possible.

We are not just nutty neighbors complaining about escaping mud.  The law is on our side, and the health of our lakes is at stake.

#     #     #
* Storm Control is item 90036 on p. D-28 of the specifications . The specs did have a standard phrase (one you see in many contracts) that "the channel can be expected to fill rapidly during rain events"--but no details were given about how to deal with this. Erosion control is too often an afterthought on City projects... poorly thought out.