Update 10/28, 10:00 am: Tim Troester has posted a new inspection for the Greenway project for 10/27.  His accurate inspection adds important detail, including the time and photos.  Therefore, I believe that Engineering is responding to my comments below, and that the situation is improving.


Inspection reports are legal documents.  They need to be accurate and detailed enough to stand up in court, under cross-examination.  Inspections by the City of Madison, for the most part, are neither accurate* nor detailed.

For that reason, some citizens have lost faith that contractors are accountable.  That's why a lawsuit was filed by residents outraged by Speedway's behavior.  And accountability is the reason for this blog.  Our thousands of photos stand as accurate inspections.  Each photo has a time stamp--in contrast to City inspections, which so far lack this basic element.
Yet Contractor Report has found instances of inaccurate inspections.
The report below, from the Hillcrest-Upland Greenway, is one example.  The online report is copied below in black text.  I will highlight errors by adding what I believe is the correct answer in red, with more general commentary in blue.
Tim Troester is the Permit Authority
John Fahrney is the Permittee and Authorized Inspector
Inspector: Paul Lauby 261-9678
plauby@cityofmadison.com
Reason for Inspection: After rainfall inspection
Inspection Date: 10/24/2010
Weather Data Source: Media Report
Last Precip. End: 10/23/2010  It was raining heavily on the morning of 10/24.

Required: Yes Condition: N/A  Applicable
These pads are supposed to be 50' long and in place at the start of the project.  The pads were thin and spotty, with patches of soil showing through.   As for N/A (not applicable), about 4 pieces of large equipment were introduced prior to 10/24, and a power shovel was removed from the site on 10/23.
Moreover, the gravel pads are supposed to be underlain with geo fabric.  These pads were not.  It was only on 10/25 or 10/26 that the contractor got around to adding the fabric, then more gravel on top. 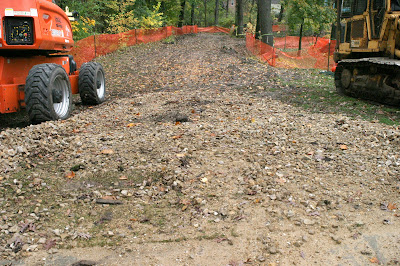 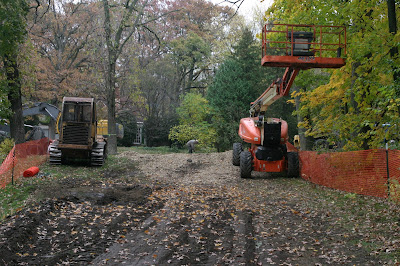 An inspection after heavy rain would be unable to determine if polymer had been applied.  So why would the inspector certify that it had been applied?   Why not write "Unable to verify?"

A silt fence was required to protect a stockpiled pile of soil, at the west end of the greenway.  After the rain of 10/26, this unprotected pile was partly eroded, since it was right next to the channel.  A silt fence would also be a good idea along the N side of the entrance, to protect the Ozanne property.  But there were NO silt fences anywhere on the site.

**  Update:  On 10/27, I found a photo of the gravel pad closer in time to the inspection it is compared to.  The previous photo, now deleted, was a day earlier.  I also added some comments, comparing Lauby's inspection to the one done a day later by Mael.  I am continuing to update this article, as I refine my ideas, partly thanks to discussions with City officials.

***  Paul Lauby (first inspection above) might reply, "Our two reports about street sweeping don't agree because the inspections were made on different days.  The situation changed."  That's possible, but it shows how an inspection with no time recorded is worthless when it comes to a contested report.  If Stewart Mael's inspection on Monday 10/25 was made before work started, then he saw the same thing as Paul Lauby's inspection the day before, on Sunday.  But if Mael's was made the end of the day on Monday, then, yes, it was a day later.
Posted by Webmaster at 3:17 PM